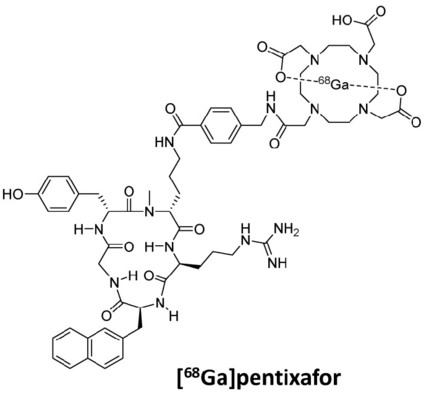 The first patients at the Centre Hospitalier Universitaire de Nantes (CHU) in France have been dosed with PENTIXAFOR, an innovative imaging compound for the initial staging of cancer patients with symptomatic multiple myelomas. The Ga-68 based radio-diagnostic promises to significantly improve the patient management for early forms of the disease by identifying the optimal therapeutic alternative.

To investigate the potential of PENTIXAFOR, the CHU will recruit up to 45 patients in an investigator-initiated study (ISS). Eckert & Ziegler, the owner of the rights to the underlying chemokine 4 receptor (CXCR4), supports the CHU team under Professor Caroline Bodet-Milin by providing the compound in exchange for access to certain data.

PENTIXAFOR is being developed by Eckert & Ziegler's subsidiary Pentixapharm GmbH as a sensitive diagnostic for rare blood cancers, including myelomas and lymphoma. In spring 2021, the European Medicine Agency gave Eckert & Ziegler green light to leapfrog into a phase III clinical examination. Clinical tests are scheduled to start next year and will involve about 500 patients worldwide.

Given the potential of PENTIXAFOR for improved patient stratification, academic groups like CHU have decided to move ahead on their own in testing PENTIXAFOR. Eckert & Ziegler closely cooperates and supports these initiatives when possible.

“The PENTIXAFOR-PET may improve sensitivity and specificity of PET imaging in symptomatic Multiple Myeloma patients, as compared with FDG-PET. An improved sensitivity of PENTIXAFOR may allow visualization of bone marrow lesions and extra-medullary disease not detected by FDG commonly generating a significant number of false negative results. Moreover, PentixaFor may allow to determine new prognostic value at baseline or during therapy evaluation,” said Pr. Bodet-Milin, principal investigator for the PENTIMYELO study, senior physician in the department of Nuclear Medicine at the University Hospital, and an eminent expert on PET lymphoma and myeloma.

“The fact that one of the leading centers in France like the CHU has decided to work on the PENTIXAFOR on its own indicates the immense interest among hematologists in the potential of PENTIXAFOR,” said Dr. Jens Kaufmann, co-founder and general manager of Pentixapharm. “We are delighted to have Professor Françoise Kraeber-Bodéré and Professor Caroline Bodet-Milin of the nuclear medicine department as the principal investigators in these tests.”

This project is supported by several cancer research associations, among them Siric ILIAD and IRON Labex.