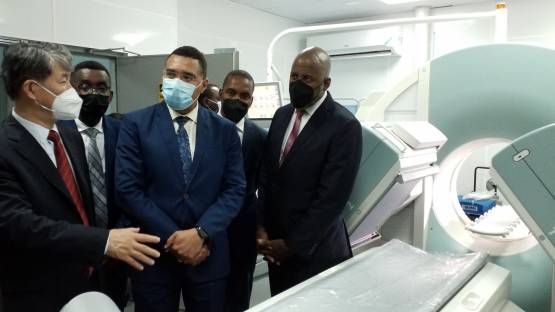 A new public nuclear medicine center has opened in Kingston, Jamaica, to provide life-saving diagnosis and treatment of non-communicable diseases. The center opened with the support of the International Atomic Energy Agency (IAEA) under its Rays of Hope initiative, launched earlier this year to help countries fight cancer. Jamaica’s first public center is located in the University Hospital of the West Indies and will help manage cancer and other diseases – including cardiovascular diseases, diabetes and chronic respiratory diseases – that are responsible for the deaths of seven out of 10 Jamaicans.

Although it has more than 7,000 new cancer cases per year, until now the country has operated only four teletherapy machines in its public medical facilities and no nuclear medicine facilities. Patients, including those with prostate, lung, and colorectal cancer – the most common types of cancer in the country – can now be diagnosed in the new center, which will extend Jamaica’s overall capabilities.

“Nuclear medicine and its support for early diagnosis and treatment can mean a difference between life and death. This facility will benefits citizens of Jamaica and wider Caribbean – patients can now get cutting-edge care at a fraction of the cost,” said Prime Minister Andrew Holness at the inauguration ceremony on June 30, 2022. “This will be the only public nuclear medicine in the country – and it is a result of the teamwork with the International Atomic Energy Agency,” he continued.

Prime Minister Holness, who attended the inauguration ceremony at University Hospital, also spoke about the importance of continuing cooperation with the IAEA to provide solutions to sustain operation of the center and to maintain the skills of its staff. In the future, the facility might also serve as a regional center providing support to neighboring countries.

“Today, we celebrate a significant milestone in the fight against non-communicable diseases,” said Hua Liu, IAEA Deputy Director General and Head of the Department of Technical Cooperation. “Through Rays of Hope, we will continue to support the expansion of radiation medicine capacities in Jamaica, in diagnosis as well as treatment, including through support for the development and training of the national cancer care workforce.”

Under the umbrella of the IAEA’s Technical Cooperation programme, the IAEA provided the new center with essential equipment such as a SPECT/CT diagnostic machine, a dose calibrator, equipment for radiopharmacy facilities and phantoms, together with a supply of the material and reagents necessary for nuclear medicine. As a part of the assistance, the IAEA has trained staff, including nuclear medicine technologists, radio pharmacists, radiologists, and medical physicists, in clinical applications of nuclear medicine. IAEA experts have also advised the country on how to establish an accredited training programme for nuclear medicine professionals.

The IAEA’s targeted assistance to Jamaica in this area started in 2014, 12 years after the last existing public nuclear medicine facility closed due to the lack of personnel and resources. Since then, Jamaica has operated two private facilities, which many people cannot afford. The facilities also did not have sufficient capacity for the country’s population of almost three million people.

The safe and secure use of radioactive material necessary for treatment and diagnosis of patients in the new center will be overseen by the Hazardous Substances Regulatory Authority (HSRA), the country’s independent regulatory body. HSRA was launched in 2020, the first fully independent and operational body in the Caribbean Community (CARICOM). Through the technical cooperation programme, the IAEA provided the HSRA with training, equipment to conduct regulatory functions and guidance to establish a new database for inventory of radiation sources.

To ensure sustainability and to contribute to the expansion of services, the IAEA will continue to provide Jamaica with assistance including PET/CT technology, radionuclide therapy, and further training of medical professionals. Such assistance is aligned to Jamaica’s National Development Plan, Vision 2030. The Plan is built on four strategic goals for the country’s development – one of which is “A Healthy and Stable Population.”

The IAEA has six decades of experience in helping countries fight non-communicable diseases including cancer. The assistance provided by the IAEA has enabled many countries including in Latin America and Caribbean to establish and strengthen safe, secure and effective radiation medicine including radiotherapy, radiology and nuclear medicine capabilities.