Until recently, proton therapy has only been available at a limited number of university-based hospitals—primarily due to the size and expense of the “big steel” components. Treatment centers offering the technology were required to house a cyclotron particle accelerator weighing more than 200 tons and an electromagnetic beamline that connected the particle accelerator with one or more 90-ton rotational beam steel gantries.

Now technological advancements have made it possible for proton therapy to expand into the private arena. Newer, simpler systems on the market are smaller in size and less expensive to purchase and operate, yet offer precise targeting and higher throughput. 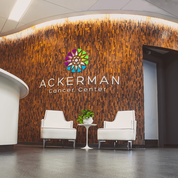 When the new proton therapy center opens this year at Ackerman Cancer Center in Jacksonville, Florida, it will be the world’s first private, physician-owned proton therapy center. Featuring the MEVION S250 Proton Therapy System, the opening will be a culmination of years of research, planning, preparation and training.

Our desire to bring proton therapy to the practice stemmed from our belief that this technology is the best treatment option for some cancer patients. Protons carry certain physical and biological characteristics that make them superior to standard x-ray therapy in treating specific cancer types.

The relatively high mass of protons allows much of the radiation dose to be delivered at the tumor site with pencil tip precision. Energy distribution from each proton beam can be directed and deposited in a three-dimensional pattern up to the Bragg Peak. Beyond that point, the dose deposit is sharply halted, in comparison with that of a photon beam, reducing collateral damage and potentially avoiding many of the side effects often seen in cancer survivors.

PBT has also been shown to be an effective method of partial breast irradiation in patients with early stage breast cancer. Patients with invasive nonlobular carcinoma with a maximal dimension of 3cm who underwent partial mastectomy with negative margins and no axillary lymph node involvement received a daily postoperative dose of proton beam radiation therapy, which were delivered at 40 Gy in 10 fractions over a two-week period. The treatment produced excellent ipsilateral breast recurrence-free survival with minimal toxicity. Cosmetic outcome was also deemed excellent and remained unchanged 5-years post-treatment.2

With fewer and less severe complications and improved quality of life, it is anticipated PBT could reduce the long-term costs of cancer treatment.

By 2000, major universities across the country had seen the value of proton therapy and were beginning to install $150 million proton units. Armed with extensive research on a variety of key proton therapy vendors, we presented a proposal to a local hospital to bring proton therapy to our community. The $150 million price tag and the additional square footage required to house the equipment was simply out of reach for that particular medical center, so we continued to play the waiting game while keeping an eye on the changing technology.

While we still believed that proton therapy would provide patients in our community with the high tech treatment and personalized care they needed, the reality was we had neither the space nor finances to secure a full-size delivery system. Still, we held fast to the vision. Grounded in the belief that proton therapy truly was the future of radiation oncology, we waited for a solution that could be integrated into one of our freestanding clinics. 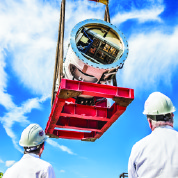 Seven years later, we met with Mevion Medical Systems to discuss their vision for a compact proton therapy system. By increasing the operating magnetic field, the company had developed a cyclotron that weighed less than 20 tons and operated at 10 Tesla. This smaller, more affordable proton accelerator, now known as the MEVION S250 Proton Therapy System, would enable us to turn our vision into a reality.

The superconducting synchrocyclotron of the MEVION S250 features a TriNiobium CoreTM that contains a superconducting metallic compound called TriNiobium Tin (Nb3Sn), which powers the machine. The MEVION S250 is capable of generating 250 MeV protons to reach tumors in depths up to 32cm, matching the precision and intensity of larger, more costly proton therapy delivery systems.

The advanced design promised to decrease the footprint of the proton center to around 8,000 square feet, substantially less than traditional proton therapy units housed in facilities ranging from 75,000 square feet and up.  The smaller size also meant the proton project price tag would drop to a more manageable $30 million and operational electrical consumption would be slashed by 90 percent.

In 2008, eight years after our failed proposal, we negotiated a system build agreement for the MEVION S250 and began the arduous process of securing financing for what was, at that point, simply a technologically advanced concept.

Securing the financial resources necessary to fund the project was undoubtedly the most challenging portion of the entire process. Since every proton therapy system in existence was associated with a major academic institution or investor funded company for profit, we were blazing a new trail.

Acknowledging we needed expert financial guidance, we hired Heritage Capital, a banking and advisory firm with global reach, to assist us in locating the right financing. Much personal time and effort also went into raising the capital needed to turn our proton therapy system into a reality. We reached out to more than 60 banks and made personal presentations to 20.

Ultimately, the large project required a customized financing structure with funding divided among four local banks. By separating funding for various aspects of the project, we were able to construct a solid financial strategy.

Throughout the process, we remained persistent and humble and tried to stay focused on our ultimate goal. Some of the banks that backed us financially now feature our practice in their advertisements as an example of how financial institutions and local businesses can work together for the good of the community.

With financing securely in place, we turned to other practical matters, including construction of a facility that could house the new equipment and arrangements for receipt of the 20-ton proton machine.

We were committed to using a local construction company and put the process in motion by meeting with a number of companies to detail job specifications.

Ultimately, the project went to Sauer, Inc., a national company headquartered in Jacksonville. It was important the expansion be coordinated in a manner that allowed the facility to remain open and operational throughout the entire process. Our past experience with the company increased our confidence they would be cognizant of our needs and adhere to our demands of quality construction.

Groundbreaking for the 6,700 square foot addition was in May 2012. Although much of the construction process was similar to any project, the sandy Florida soil meant we had to dig 98 feet below the surface to reach firm footing for the 120 pilings that would support the three-story facility. The high water table at the site also mandated a waterproofing system be placed to prevent damage to the existing structure that could occur if the water level shifted.

In addition, the vault needed to house the proton accelerator was to be constructed with eight feet thick concrete walls topped off with five and a half feet of additional concrete acting as a ceiling. We also had to devise a way to get the 84,000-pound proton accelerator into the treatment vault. This was accomplished by designing a two-piece, interlocking, removable ceiling system large enough for the accelerator to be passed through. Roof plugs were then placed to prevent radiation from escaping. Each of the custom casted 50,000-pound plugs was lifted into position by the largest mobile crane available in the state of Florida.

The first of the Mevion equipment, the proton arms, arrived in September 2013, later followed by the proton accelerator. Once all the equipment was placed and operational, the initial proton beam was tuned, steered and optimized by Mevion personnel to produce a consistent 250 MeV proton beam. Following approximately three months of optimization and testing, the system was released to our physicists for proton commissioning.

During this process, every option for proton treatment was measured using ion chambers, parallel plate chambers, water tanks and other sophisticated electronic devices to not only verify that everything is functioning properly, but also to collect all the data needed for the RaySearch, 3-dimensional treatment planning system. The planning system is then verified to accurately model and calculate treatment plans. These plans define each customized treatment plan for every patient and electronically deliver the information to the treatment delivery system. The commissioning process also includes all of the treatment, QA, delivery and safety protocol formation.

It is imperative that small centers have the right staff and technology to support proton therapy. To gear up for the opening of the proton therapy addition, we conducted extensive in-house training of existing staff. Some current staff members had previous experience in working with proton therapy but to ensure the entire staff was properly prepared, we looked for any opportunity for them to participate in the Mevion training sessions offered onsite at Ackerman Cancer Center or at other proton treatment facilities.

We also hired additional medical physicists, radiation therapists and dosimetrists in anticipation of the launch. Integrating new staff into our current practice prior to the opening of the proton therapy center allowed time for onboarding and training.

Since there was already an existing proton therapy center in the area, the concept was not a new one in our community, but we needed a way to let patients and physicians know they would soon have an option. Our marketing plan utilized a multi-faceted approach involving already existing relationships with referring physicians, patient-directed referrals and outreach to patients and oncologists in the region.

As the first privately owned proton therapy center in the world, we have enjoyed considerable local media coverage. Information about our proton therapy machine has appeared in the Jacksonville Business Journal and on the local TV news channels.

We relied heavily on social media as a way to get the word out. Current and past patients, their families, and members of the local medical community received periodic updates on the progress of the construction process through Facebook and our online newsletter. Additionally, we revamped our website and marketing materials and profiled the proton therapy center on the new website including a time-lapse video of the entire construction process. A number of patient inquiries have come from individuals who discovered us through online searches.

Raising capital for the venture is both complex and time-consuming. Make sure practice finances are in order and develop a solid financial plan. Stay focused on the task at hand and try to avoid discouragement. Consider all options including dividing project expenses among multiple banks or financiers.

Use existing proton therapy centers as resources and learn from their mistakes and triumphs. Just as we benefitted from the experiences of previous proton center installations (like Barnes Jewish in St. Louis), we anticipate serving as a resource for those who come after.

Finally, remain aware of current reimbursement and coverage guidelines. It is important to be able to mitigate costs quickly through adequate patient flow and prompt payment.

It is exciting to be able to offer this technology in a private practice setting. It is rewarding to know Ackerman Cancer Center patients will soon be able to receive the same cutting edge treatment previously available only in large institutional settings.

Dr. Ackerman is the medical director of the Ackerman Cancer Center, Jacksonville, Florida.