The prostatic capsule is a thin layer of compressed fibrous tissue and not a true epithelial capsule. Imaging with ultrasound depicts the pericapsular fat as a strongly echogenic structure, while MRI appearance resembles that of a dark envelope. Thinning of the capsule is often noted in benign hyperplasia. The capsule tends to be incomplete around the apex, which accounts for more extraprostatic spread from tumors at the apex. Similar to routine focal tumor diagnosis, capsular erosion must appear in 2 of the 3 orthogonal views.

Capsular invasion occurs with infiltration of the cancer into the fibrous capsule. Capsular penetration is tumor invasion extending beyond the capsule that produces bulging, irregularity of the capsule and gross tumor noted invading the fascial planes. Perineural invasion, a microscopic diagnosis, cannot be inferred from diagnostic imaging at this time. However, the nerve supply of the gland tends to follow the major arterial network, which can be imaged with color Doppler sonography (CDS) or power Doppler sonography (PDS). Capsular lateral wall erosion is often best imaged in the coronal view on 3-dimensional (3D) PDS while posterior erosion usually is best depicted on the transverse 3DPDS. MRI, with its inferior capsular resolution (including endorectal coil scans), may not always confirm extracapsular disease clearly exhibited on high-resolution sonography.1-7 During examination of a suspicious capsule finding, we may use the real-time 4D mode to target the anomaly and better image the extent of penetration.

The new optical dermatologic modalities of RCM (reflectance confocal microscopy) and OCT (optical coherence tomography) are highly accurate in detecting malignant capsule penetration and are now used in other solid organ tumors with great accuracy but limited depth penetration. Highly suspect areas are then checked for spread to the seminal vesicles and a search is performed for lymphadenopathy. We then show patients whether the disease is local; and if it is, we discuss that further surgical intervention is unlikely needed at this time. Patients are reassured since they simultaneously see the 3D as the exam proceeds in systematic stages. Four-dimensional imaging permits image-guided biopsy of the most virulent area of the tumor and allows the pathologist to focus on the most suspicious region of the lymph node mass excised during prostatectomy. Similarly, during a real-time exam, the patient may see gross extracapsular disease or seminal vesical invasion so plans for radiation or other therapies may be initiated in a timely manner.

Because fear of complications may deter patients from seeking medical intervention, many opt for noninvasive diagnostic options. Cancer treatment depends on the tumor volume and depth penetration, but many cancers provoke a benign local immune response or coexistent inflammatory reaction that simulate a much larger area of malignancy such as cicatrix formation accompanying chronic prostatitis indistinguishable from a stone or malignancy. Imaging highlights the true border of the tumor promoting the sparing of healthy tissue and resulting in smaller excisional margins and less scar formation.

Blood vessel mapping using various Doppler modalities is routinely used in both cancer treatment and reconstructive preoperative planning. In cancer surgery, it is important to know if there are any aberrant large veins or significant arteries 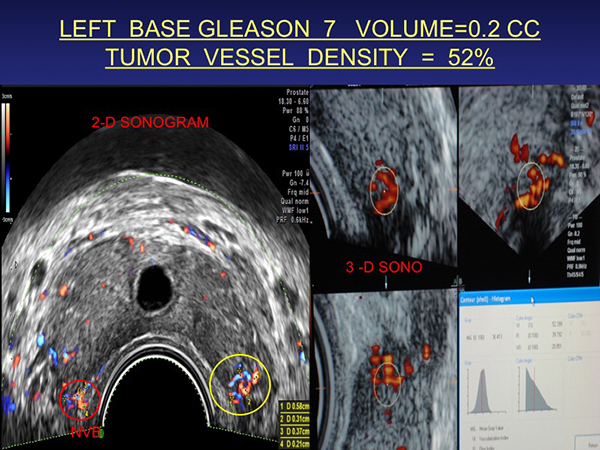 in the operative site to help minimize postoperative blood loss. Advanced 3D Doppler systems allow for histogram vessel density measurement of neoplastic angiogenesis. (Figure 1 to the right). This baseline of neovascularity is used worldwide as a reliable treatment surrogate endpoint.8-22

Prostate cancer identified by 4D delimited by the capsule and of low vessel density is being followed serially in 6-month intervals. Subsequent capsular invasion or an increase in vessel density histogram analysis requires urologic or oncologic measures. Bladder cancer is evaluated concomitantly with the prostate and neovascularity and wall invasion are noted before surgical referral.

In 1990, Dr. Rodolfo Campani, director of the University of Pavia Radiology Department, developed contrast-enhanced ultrasound (CEUS) cancer imaging for liver tumors followed by Drs. Cosgrove (London) and Lassau (Paris) for breast, prostate and melanoma. CEUS is currently used worldwide but not fully FDA approved in the United States. Microbubble media shows tumor neovascularity with exquisite detail evaluating therapeutic response in solid organs. This is important since the RECIST studies demonstrated that tumor enlargement during treatment may be related to apoptotic cell death with cystic degeneration or immune cell infiltration destroying malignant tissue while increasing the lesional volume. Doppler ultrasound or CEUS reliably verifies decreased angiogenesis in these cases instead of using contrast CT or dynamic contrast-enhanced MRI (DCE-MRI) for confirmation. Thermal treatments such as cryotherapy, HIFU or laser ablation are designated complete when penetrating cancer arteries are no long visible to the imager. It is important to note that prostatitis and post-treatment changes by radiation or other therapies distorts the imaging anatomy by all modalities and the true evaluation of recurrence is best determined by vascular perfusion studies that are superior surrogate tumor markers than other indicators. New oncologic response limiting positron emission tomography/computed tomography (PET/CT) accuracy is “pseudo-progression” demonstrating cancer tumor burden increases during successful therapy and even shrinking tumors can be oncologically viable. Post radiation therapy imaging in successful cases may show a decrease in tumor neovascularity is as short a time as 4 weeks suggesting short interval neovascular evaluation as a better indicator of effective response than standard protocols.

Advances in laser/optical devices allow near microscopic tissue analysis of the cells by noninvasive testing. Real-time microscopy during surgery verifies that the tumor border is clear in cases of skin cancer, and future use in breast and prostate cancer treatment is under clinical study. In true capsular penetration, radiation treatment becomes a better option. Since the 18 MHz probe is directly in contact with the capsule, the resolution is 5 times greater than MRI capability. MRI is routinely used to verify malignant lymphadenopathy and has been highly successful after 3D/4D imaging has ascertained and localized the extraprostatic disease.23

Abnormal immune responses that initially appear in the skin are associated with increased multiorgan cancer incidence including breast and prostate disorders. Inflammatory vessels in psoriasis and infection are visibly cataloged since successful treatment is quantified by measured decrease in the number and type of abnormal vessels. High vascular immune vessel density is proportional to increased risk of future neoplastic tissue manifestations. Many arthritic conditions have coexistent dermal manifestations alerting us to the probability of more extensive subclinical joint involvement. Thus, patients with collagen disorders, contact dermatitis of unknown etiology, or overexposure to toxins as we see in the 911 First Responders, are candidate for cancer screening at 6-month intervals. The statistics from the cancer organizations monitoring the World Trade Center disaster have found the incidence of skin cancers to be highest followed by bladder and prostate cancer. The general public is sensitized to the fact that our contaminated food supply, medicines and overall environment has increased our risk and are demanding more accurate cancer detection options.

Dr. Bard is the director of Bard Cancer Diagnostics in New York, NY.