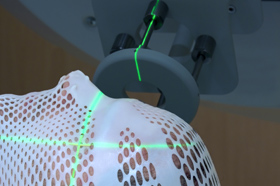 The trial builds on previous research that established SRS as the standard of care for patients with one to three brain metastases. "Whole brain radiation was the backbone of treatment for brain metastases for a very long time. When stereotactic radiosurgery became available, however, we saw its potential to reduce the cognitive deterioration associated with whole-brain treatment and improve patients' quality of life," said Dr. Li. SRS is more convenient for patients and minimizes interruption of systemic therapy, as well; while WBRT typically is given in 10 treatment sessions over a period of two weeks, radiosurgery generally is completed in one single-day session.

An estimated 1 in 5 patients with cancer will develop brain metastases when primary cancers, most commonly breast cancer, lung cancer or melanoma, spread to the brain. Brain metastases are diagnosed in an estimated 150,000-200,000 people each year, with rising incidence as improved treatments help patients live longer.

"Cognitive decline is one of the most debilitating effects of brain metastases and treatment, and a key goal of treatment is to improve functioning in the brain for patients with these tumors," explained Dr. Li. Previous trials have indicated that upwards of 90% of patients with brain metastases experience cognitive impairment before treatment, most commonly trouble with attention, memory or information processing.

Radiosurgery, compared to WBRT, was associated with shorter interruptions of systemic therapy (time to systemic therapy: SRS 1.7 weeks, WBRT 4.1 weeks, p=0.001). This finding is particularly important for patients with metastatic disease, explained Dr. Li, as they benefit from systemic therapy to control cancer outside of the brain.

Four patients who received WBRT (15%) and two who received SRS developed (8%) grade 3 or higher toxicities. Radiographic evidence of radiation necrosis, a side effect associated with SRS, was observed in 17% patients on the SRS arm of the trial (4% of all treated lesions).

Next steps for the research team include comparing SRS with a newer form of WBRT designed specifically to avoid the hippocampus, a brain structure that is central to learning and memory. While a recently published trial (NRG Oncology CC 001) found an advantage of hippocampal-avoidance over standard whole-brain treatment, no trial has compared it with SRS. "Both options are currently considered standard treatment, and both options have pros and cons. We need randomized data to understand which patients will benefit most from each of these treatments," said Dr. Li.