A 56-year-old man presented in December 2013 with lower extremity radicular pain, numbness and weakness. His medical history was significant for a pT3b renal cell carcinoma (RCC) diagnosed in January 2013 status post nephrectomy. At the time of consultation, physical exam demonstrated decreased sensation over the lateral aspect of his right leg. Two months prior, chest computed tomography (CT) had revealed several subcentimeter nodules suspicious for metastatic disease, and the patient was started on sunitinib. Due to concern for epidural disease, MRI of the lumbar spine was done, which revealed a destructive lesion within the L4 vertebra (Figure 1).

The patient met inclusion criteria for and was offered RTOG 0631, a phase II/III study of single-fraction stereotactic radiosurgery (SRS) vs. conventional external-beam radiation therapy (EBRT). The primary endpoint of this study is pain control. The patient was randomized to SRS and 16 Gy was prescribed to the L4 vertebral body and posterior elements (Figure 2). The cauda equina was constrained to V12 Gy ≤ 10% and maximum point dose < 16 Gy.

Shortly after completing SRS, the patient suffered from a pain flare at the treated site. A steroid taper was prescribed, and the pain rapidly resolved. Two weeks after SRS, the patient was seen in clinic and reported significantly decreased pain, resolved numbness, and increased strength.

Six months after SRS, follow-up imaging demonstrated slight posterior wedging of the L4 vertebral body (Figure 3), and the decision was made to proceed with kyphoplasty. His systemic disease remained stable through May 2015, at which time an L2 metastasis was observed. The L4 metastases remains controlled through 25 months of follow-up (Figure 4).

Imaging of the lumbar spine at presentation demonstrated a 3.4-x-2.8-cm lesion within the right posterolateral aspect of the L4 vertebral body. This extended into the right pedicle, epidural space, and encroached upon the superior and inferior neural foramina (Figure 1).

This report demonstrates several areas of interest in the field of stereotactic radiosurgery of the spine. The incidence, time course, and risk factors for pain flare and vertebral compression fracture have been well-studied in multi-institutional and prospective investigations.1,2 In contrast, the use of targeted therapies with SRS has not been investigated in controlled settings, with conflicting evidence on safety and efficacy.3–5 While many retrospective and single-arm prospective investigations have suggested increased durability of symptomatic and radiographic control, results from RTOG 0631 are awaited to determine the relative benefit of SRS over EBRT.

Vertebral compression fracture is the most common late toxicity following SRS. While SRS and EBRT offer palliation of tumor-related discomfort, pain secondary to bony instability cannot be treated with radiation therapy, but may be alleviated with vertebral augmentation.10 In a multi-institutional study of 410 spinal segments treated with SRS, the 12-month cumulative incidence of fracture was 12%.1 A dose-response relationship was identified, with doses > 20 Gy per fraction associated with an increased risk for fracture. Because these fractures may lead to chronic mechanical pain, spinal segments may be reliably risk-stratified using the Spinal Instability Neoplastic Score.11 In high-risk cases, dose reduction may be appropriate in an effort to maximize patient quality of life.

Finally, an area of particular interest is the use of high-dose, hypofractionated radiation therapy with concurrent targeted therapies. Preclinical models have supported a synergistic relationship between angiogenesis inhibition and radiation, and uncontrolled retrospective series have reported excellent local control with combined therapy.5 Furthermore, the immunogenic characteristics of hypofractionated radiation therapy have been hypothesized to augment targeted immunotherapies.12 In the present report, a patient with oligometastatic renal cell carcinoma undergoing concurrent systemic therapy with an anti-angiogenic tyrosine kinase inhibitor (TKI) was treated with SRS. For patients undergoing upper thoracic or cervical SRS with concurrent TKIs, esophageal toxicity may be a significant concern.3 In addition, it is unknown whether rates of pain flare or fracture are increased with the use of combined therapy. Despite these concerns for safety, retrospective evidence has suggested a significant local control benefit with the addition of TKIs to SRS. In support of this hypothesis, local control has been durable through 25 months of radiographic follow-up in this patient. This efficacy may support a role for upfront aggressive treatment of oligometastatic disease with definitive intent. To explore this role, an ongoing cooperative trial (NRG-BR001) is investigating the safety of stereotactic body radiation therapy for oligometastatic disease.

This report demonstrates several key considerations associated with the use of spine stereotactic radiosurgery. Pain flare and vertebral compression fracture are common complications, which may be managed with steroids and vertebral augmentation. However, sequelae of tumor ablation may be irreversible, and fracture progression may lead to chronic mechanical pain. Despite this, SRS appears to achieve high rates of symptomatic and radiographic control, with limited data available describing the efficacy of SRS combined with targeted therapies. 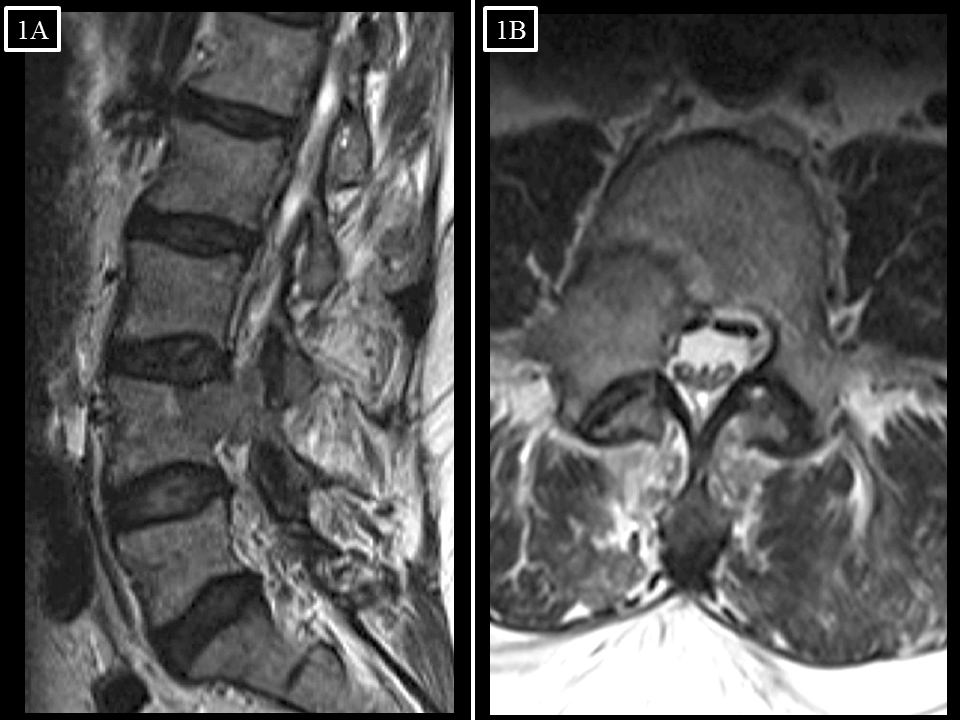 FIGURE 1. (A) Sagittal and (B) axial T2-weighted MR images of the lumbar spine upon presentation (12/2013) with lower extremity radicular symptoms. A lesion is present within the right posterolateral aspect of the L4 vertebral body, extending through the right pedicle and into the epidural space without effacement of the cauda equina. 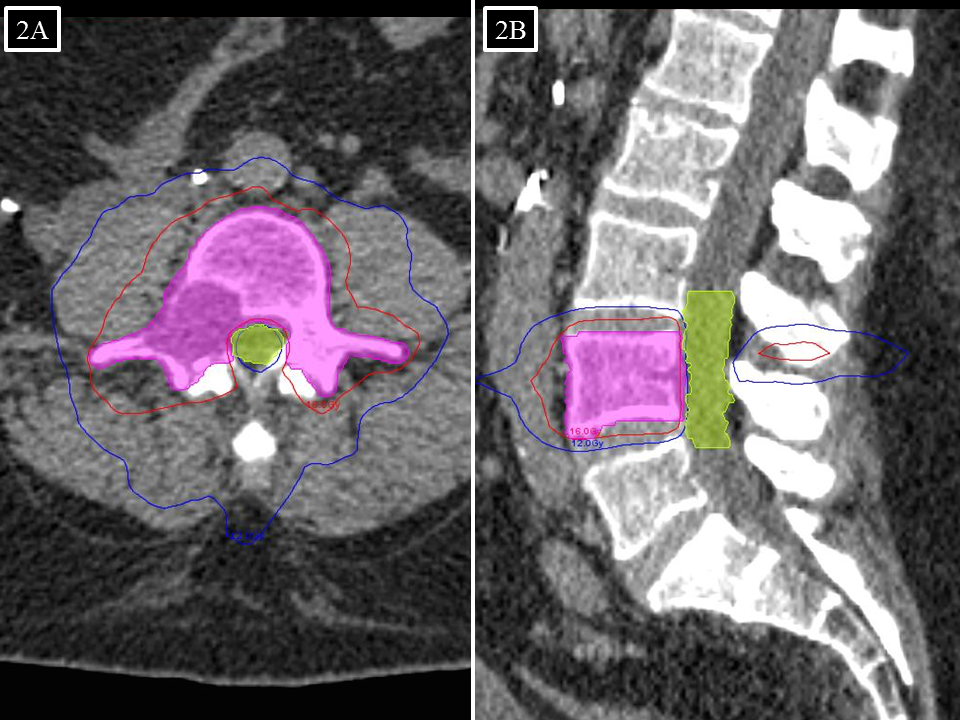 FIGURE 2. (A) Sagittal and (B) axial images of stereotactic radiosurgery plan for L4 vertebra, with 10 Gy (blue) and 16 Gy (red) isodose lines. 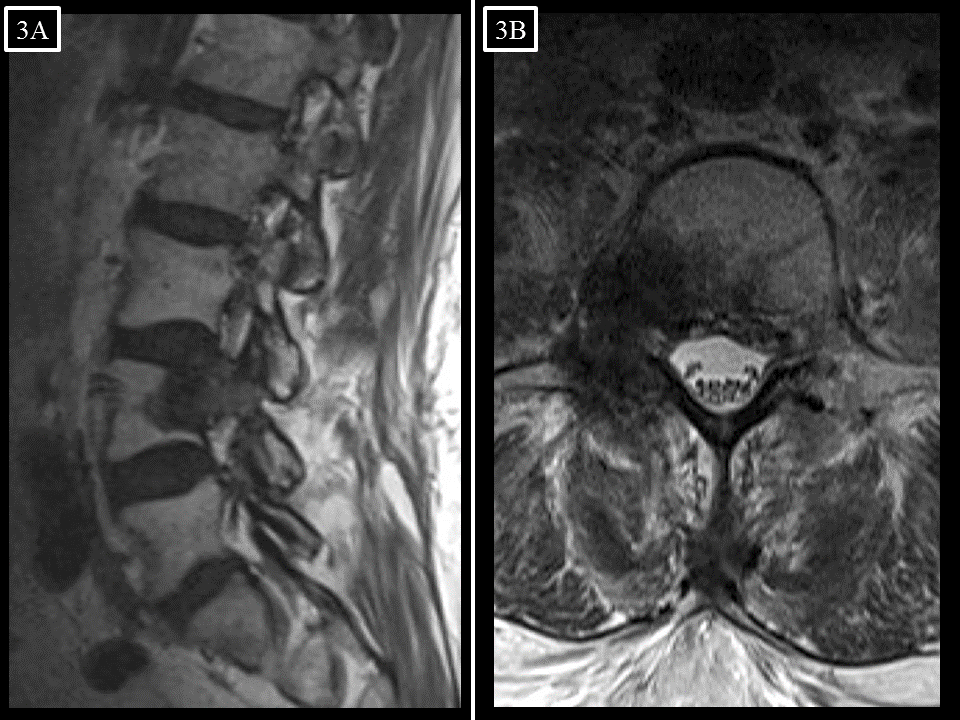 FIGURE 3. (A) Sagittal and (B) axial T2-weighted MR images of the lumbar spine 6 months following SRS (6/2014). The volume of epidural disease has decreased, and there is no evidence of local progression. However, this is slight posterior wedging of the L4 vertebral body. 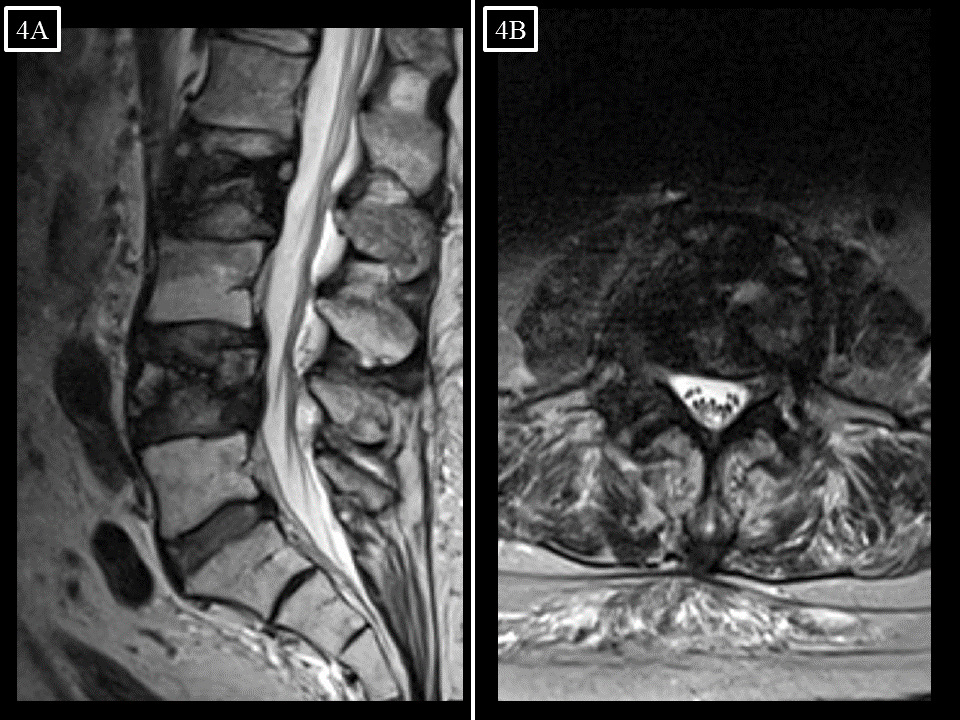 FIGURE 4. (A) Sagittal and (B) axial T2-weighted MR images of the lumbar spine 25 months following SRS (2/2016). There has been significant interval collapse of the L4 vertebral body without local progression, and an L2 metastasis is evident.