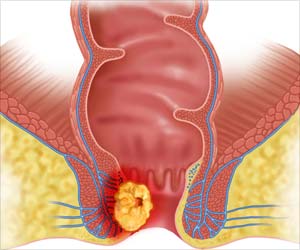 With IMRT, doses are prescribed to different target volumes and radiation dose constraints are defined for adjacent healthy organs. A radiation field is partitioned into multiple smaller fields, producing variability of the intensity of the radiation beam for any one field. The end result is a radiation dose distribution that closely conforms the radiation dose around a target tumor or target volumes. Studies show that severity of toxicities is reduced, and the number and duration of treatment breaks are minimized with the use of IMRT.

Radiation oncologists have been striving to identify techniques and methods to limit gastrointestinal toxicities and to identify patients for whom less radiation dose to both a tumor target and organs at risk can be prescribed without compromising clinical outcomes.

Led by Michael Ng, MD, of the GenesisCare Radiation Oncology Centre St. Vincent’s in Melbourne, the radiation oncologists identified patients who developed acute severe radiation-induced diarrhea and correlated dose-volume metrics. They assessed which bowel OAR dosimetric parameters were most closely associated with acute diarrhea. A key objective was to determine the most practical way for community-based radiation oncologists to contour bowel volume in radiation therapy treatment planning that was fast, simple, and reproducible.

The authors measured 12 parameters for each of the methods of bowel contouring. These included total volume, maximum dose, and volumes receiving radiation dose in 5 Gy increments between V5Gy to V50 Gy. They compared the values for patients with grade 0/1/2 diarrhea with those of grade 3 for each of the 12 parameters.

“Bowel cavity was the most sensitive OAR correlated with grade 3 diarrhea, with each 5 Gy bin highly discriminatory...Using bowel cavity V30 Gy, a V30 GY ≤ to 300 cm3 can predict a grade 3 diarrhea risk of 6% vs. a V30 Gy > 300 cm3 predicts a 41% risk,” they wrote. The authors also advised that large bowel was not correlated with diarrhea. They added that women tended to have more severe diarrhea, noting that the median bowel cavity volume for women was 670 cm3 compared with 500 cm3 for men.

The authors determined that the dose to bowel cavity was the best predictor of severe acute diarrhea compared to all the other ways to contour bowel volume. They recommend its use and the metric V30 Gy as the single bowel dose constraint in radiation therapy planning, as well as being an efficient and pragmatic method for planning optimization. Patients who have a predicted higher risk of bowel toxicity can be identified early and managed appropriately to ensure treatment completion.

The anonymized patient sample was obtained from the Surveillance, Epidemiology and End Results (SEER) registry. Patients ranged in age from 68 to 79 years, and 75% were Caucasian women. The patients underwent therapy between 1996 and 2011. The authors noted that a higher percentage of patients received radiation therapy only from 2008 to 2011, but there was no significant difference in the use of IMRT. Only 50 patients in the total cohort received IMRT, approximately 16% for each group.

The authors determined that outcomes were comparable. However, chemoradiation was associated with a higher frequency of pain and inflammation of the rectum, with late toxicities persisting at a two-fold higher rate than if a patient received only radiation therapy.

“Younger patients with stage I disease receive chemoradiation treatment,” Dr. Buckstein added, noting that these patients were not well represented in their study. “We are concerned about missing a potential therapeutic window for cure. And because there is very convincing randomized evidence that CRT is superior to RT alone for stage II and III disease, we would not consider RT alone for node-positive disease.

Cynthia E. Keen is a medical writer and regular contributor to Applied Radiation Oncology. She is based in Sanibel Island, Florida.