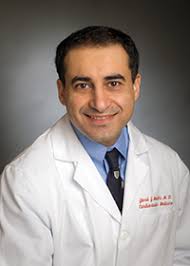 After a recent study showed that chronic lymphocytic leukemia patients who received ibrutinib as a frontline treatment had a 7% death rate, a new study offers a clearer picture on the reasons for the deaths.

A team of researchers utilized the VigiBase, a global database of drug complications maintained by the World Health Organization, to analyze deaths associated with ibrutinib, a targeted therapy for several blood cancers that has boosted long-term survival rates and proven superior to other therapies. However, ibrutinib also was shown to have a death rate of 7% compared to 1% for chemotherapy during treatment or within 30 days afterward, according to a study published Dec. 27, 2018, in The New England Journal of Medicine.

The death rate, which was noted on the eighth page of that study, stood out to Javid Moslehi, MD, (pictured above) director of Cardio-Oncology and associate professor of Medicine at Vanderbilt University Medical Center. He is part of a team at Vanderbilt-Ingram Cancer Center focusing on toxicities associated with targeted therapies, immunotherapies and other newer treatments.

“Seven percent of people dying from a frontline treatment is not a good thing,” said Moslehi, the senior author of a follow-up study published Sept. 23 in Journal of The American College of Cardiology that analyzed deaths associated with ibrutinib utilizing VigiBase.

“Our study is interesting in that it allowed for detection of new signals of potentially fatal cardiovascular toxicities associated with ibrutinib, such as heart failure, conduction disorders and central nervous system hemorrhagic events. Treating physicians should be aware of these risks,” said the study’s lead author, Joe-Elie Salem, MD, PhD, associate professor of Cardiology and Pharmacology at Sorbonne University and adjunct professor at Vanderbilt University.

Some of the cardiovascular adverse drug reactions associated with ibrutinib are difficult to treat.

“The challenge is that from a cardiology perspective we don’t always know what to do,” Moslehi said. “For example, we generally treat patients with atrial fibrillation with blood thinners. The problem is that ibrutinib also thins the blood, so you already have a bleeding risk. That is a problem.”

The study noted “there is a clear and pressing need to improve management of these patients.” The research team is currently investigating what protein kinase within the drug mechanism is causing the atrial fibrillations and how best to reverse the effect, Moslehi said.

Two of the cardiovascular adverse drug reactions identified in the VigiBase analysis – heart failure and conduction disorder – are new findings.

The median time from start of treatment with ibrutinib to onset of supraventricular arrythmia was two to three months. The median time was four to five months for hypertension. Heart failure, brain bleeds and ventricular arrythmias had onset times of two to three months. However, the onset of conduction disorder occurred more quickly, mainly within the first month of treatment.

Moslehi and the team of oncologists who are co-authors on the manuscript, including Nishitha Reddy, MBBS, MSCI, associate professor of Medicine at Vanderbilt University, urge monitoring patients closely when prescribing ibrutinib and to consult with cardiologists with difficult patient cases.