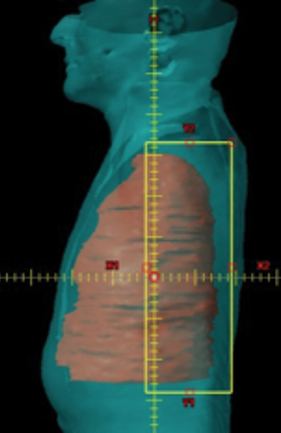 Mesothelioma patients are twice as likely to survive for two years or longer, if they are treated with a high dose of radiation to the affected side of the trunk, according to research presented at the ESTRO 38 conference held in Milan April 26-30.

Mesothelioma is a rare but aggressive form of cancer that grows in the layers of tissues surrounding the lungs. It is usually caused by exposure to asbestos. Patients typically only live for a year or two following diagnosis and treatment options are very limited.

The study looked at patients whose cancers could not be completely removed with surgery and the researchers say their findings have the potential to change treatment and outcomes for this group of patients.

The study was led by Marco Trovo MD, chief of the Radiation Oncology Department at University Hospital of Udine, Italy. He said: “There is an urgent need for more effective treatments for mesothelioma. Surgery can be given to these patients, but it is often impossible to remove all of the tumor.

“Patients with mesothelioma are sometimes given radiotherapy to help control their symptoms. However, radiotherapy has evolved dramatically in the last few years so we wanted to see if it could now be used to prevent the cancer from spreading to nearby tissue, hopefully bringing improvements in survival.”

The study involved 108 patients with malignant pleural mesothelioma who were treated at the National Cancer Institute of Aviano, Italy, between 2014 and 2018. All were given surgery to remove some tumor tissue, followed by chemotherapy.

Dr. Trovo said: “This research shows a clear survival benefit in using this type of radiotherapy for mesothelioma patients whose tumors can only partially be removed by surgery. We believe that this should be considered the new standard of care for these patients.”

He hopes that even greater gains in survival could be made by treating patients with radiotherapy followed by targeted immunotherapy (where the body’s own immune system is encouraged to fight cancer cells).

Professor Umberto Ricardi, President of ESTRO and head of the Department of Oncology at the University of Turin, Italy, who was not involved in the research, said: “This is an extremely positive result that brings good news to patients with this rare and difficult-to-treat cancer. To ensure these patients benefit from this type of treatment, it’s important that they are referred to a specialist cancer centre with the right expertise and equipment to carefully plan and deliver the most effective radiotherapy treatment, and manage any side effects that occur.”

This work received no external funding.