E-cigarette use climbing among cancer patients and cancer survivors 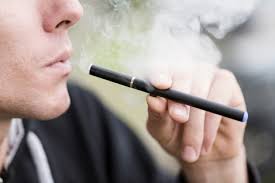 E-cigarette use is climbing among cancer patients and cancer survivors, according to a new study by Nina Sanford, MD, an assistant professor of radiation oncology at UT Southwestern Medical Center in Dallas.

The study found that:

“The gradual but steady increase is quite striking,” said Dr. Sanford, who specializes in treating cancers of the gastrointestinal tract. “The high prevalence of e-cigarette use among younger cancer patients and survivors is concerning.”

Dr. Sanford’s analysis was based on data from the Centers for Disease Control and Prevention’s National Health Interview Survey, which included more than 13,000 cancer patients from 2014 to 2017. Her findings were published in the journal JAMA Oncology in February.

The study findings shed new light on e-cigarette use as the products gain increased attention ranging from federal government crackdowns on e-cigarette sales to claims that e-cigarettes can be used to quit traditional smoking.

Usage of e-cigarettes, also called “vaping,” has medical experts concerned because of the addictive nicotine and potentially harmful toxins they deliver. The battery-operated products produce an aerosol that users inhale into their lungs like traditional smoking.

Dr. Sanford said she seized on the opportunity to study the data because there is so little known about e-cigarette use in cancer patients.

“Because e-cigarettes are relatively new, we don’t have the long-term data on their side effects yet,” she said.

With so little known about e-cigarettes and what they do to the body, Dr. Sanford said the best bet is to avoid them all together. She noted that e-cigarettes often produce harmful chemicals such as lead, nickel, and acetaldehyde. Conventional smoking can impede healing from surgery and radiation therapy so it is possible that e-cigarettes could cause similar difficulties, she said.

Dr. Sanford said patients often ask about e-cigarettes, and she recommends staying away from all kinds of smoking instead of trying to substitute e-cigarettes for traditional cigarettes.

“I don’t encourage it, but I also am honest that the jury is still out on what the long-term effects of e-cigarette use are,” she said. “These are not an FDA-regulated product. There’s wide variation of what goes into them. When you pick up an e-cig in the store, you really don’t know what’s in it.”

Regulation of e-cigarettes has just begun and so have studies of the products. Dr. Sanford said medical experts need to know much more, and it will take decades to know if e-cigarettes cause cancer.

“It’s a new area, and there’s just no long-term data on e-cig use so there’s going to be a lot of controversy on what to do until more rigorous studies are published, particularly given the diverse entities involved, ranging from cancer organizations to e-cigarette companies,” she said.