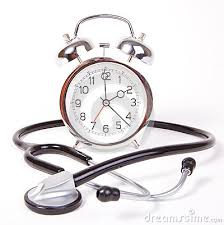 Compared to patients who see their primary care doctor earlier in the day, cancer screening rates decline significantly as the day goes on, according to a new study from researchers in the Perelman School of Medicine and the Wharton School both of the University of Pennsylvania. The researchers, whose findings were published May 10 in JAMA Network Open, believe these rates of decline may be in part due to “decision fatigue” — which results from the cumulative burden of screening discussions earlier in the day — and doctors falling behind in their busy schedules.

“Our findings suggest that future interventions targeting improvements in cancer screening might focus on time of day as an important factor in influencing behaviors,” said the study’s lead author, Esther Hsiang, a Wharton Business School student and researcher with the Penn Medicine Nudge Unit. “We believe that the downward trend of ordering may be the result of ‘decision fatigue,’ where people may be less inclined to consider a new decision after they’ve been making them all day. It may also stem from overloaded clinicians getting behind as the day progresses.”

The researchers found that, among eligible patients, primary care doctors ordered breast cancer screening more often for patients seen in the 8 a.m. hour (64 percent) as compared to those with appointments at 5 p.m. (48 percent). Similarly, for colon cancer screening, tests were also ordered more frequently for 8 a.m. patients (37 percent) compared to those coming in later in the day (23 percent).

Examining data from 2014 through 2016 across 33 Pennsylvania and New Jersey primary care practices, the researchers found that ordering rates had far-reaching effects. When looking at the entire population eligible for screenings at these practices (roughly 19,000 for breast cancer and 33,000 for colorectal cancer), the researchers tracked whether the patients completed a screening within a year of their appointment. The data showed that the downward trend associated with the timing of the appointments carried over.

Breast cancer screening—which included mammograms—stood at a 33 percent one-year completion rate for the entire eligible population who had their appointment in the 8 a.m. hour. But for those who had clinic visits at 5 p.m. or later, just 18 percent completed screenings. For colorectal cancer, screenings such as colonoscopies, sigmoidoscopies, and fecal occult blood tests were completed by 28 percent of the patients with appointments in the 8 a.m. hour. That number dropped to 18 percent for patients who saw the doctor at 5 p.m. or later.

The one-year completion results cast long shadows. While doctors may simply be deferring discussions about screening to future appointments, it assumes that the decision will be made the next time. Additionally, these types of cancer screenings also require coordination with a different department and another visit on the part of the patient, which provide several opportunities for further lapses in screening.

Researchers also observed that although order rates fell as the day progressed, there was a brief spike in screening orders for breast and colon cancers when patients saw their clinician around noon. For example, breast cancer screening orders dropped to 48.7 percent at 11 a.m. but increased to 56.2 percent around noon, before gradually falling off again. This trend held true for one-year completion rates, as well. The study team suggest that this may be due to lunch breaks that give clinicians and opportunity to catch up and start fresh.

A downward trend in outcomes by hour was noted in a study in 2018 examining the rates of flu vaccinations by the time of day when patients saw a clinician. In that study, a “nudge” was built into the system that prompted doctors to accept or decline an influenza vaccine order, which helped spur an increase of vaccinations by nearly 20 percent, as compared to patients with doctors who weren’t nudged.

“Our new study adds to the growing evidence that time of day and decision fatigue impacts patient care,” said Mitesh Patel, MD, MBA, director of the Penn Medicine Nudge Unit and an assistant professor of Medicine. “In past work, we’ve found that nudges in the electronic health record can be used to address these types of gaps in care, which we suspect will be the case here. Future research could evaluate how nudges may be implemented in order to improve cancer screening.”